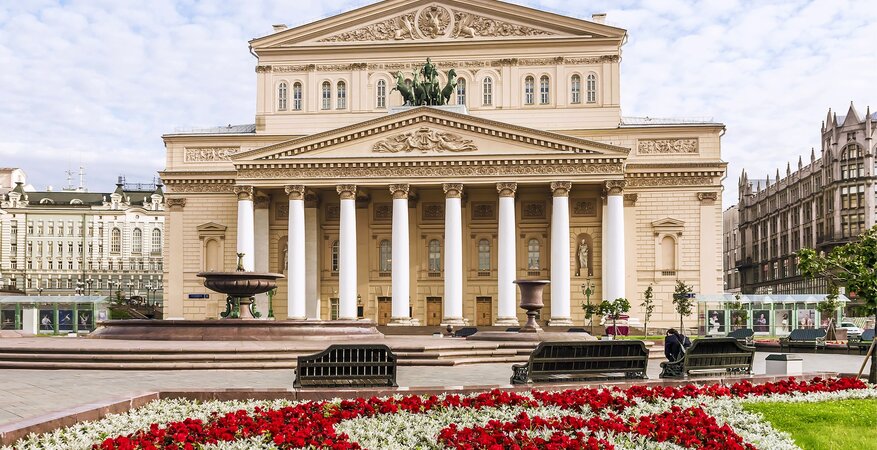 Arrival to Moscow,  meeting at the airport by coach with French speaking guide,   transfer to hotel for accommodation

Half day city tour of Moscow - the largest city in this country, its capital,  political and cultural centre of Russia.  Moscow territory is 1000 sq km and population is 12 mln people.  The highlight of city tour is visit to the Red Square.  You can see the Kremlin walls and Towers,  the State Historical museum,   St.  Basil Cathedral,  the monument to Minin and Pozharsky,  «Lobnoe mesto» -the round structure,   a kind of a tribune,  the Saviour tower.   In the centre of the square is Lenin's tomb,  GUM.  This building originally contained over a thousand of individual shops along three parallel glass-roofed passages.  You can enjoy a bird view of centre of Moscow from Sparrow- Hills - highest point in the city and see Moscow State University.  Russian White House,  Old Arbat street, Bowing Hill with 2nd World War memorial are the important parts of the city tour. Lunch downtown

Tour of Moscow Kremlin and Armory Chamber-A unique complex of architectural monuments surrounded by ancient red brick walls crowned with 19 towers,  which are an important city landmark.  The first wooden Kremlin was built by order of prince Yuri Dolgoruky in 1156.  Later on during the reign of Prince Dmitry Donskoy white stone walls were erected. And in the 15th century when the seat of Orthodox religion was moved to Moscow,   several Italian architects were invited to reconstruct the Kremlin,  especially its cathedrals and chapels.  Thus the architectural ensemble of Kremlin we can see today has appeared.  The center of Kremlin is the Cathedral Square with the Cathedral of Assumption,  where royal wedding and coronation ceremonies used to take place.  The Cathedral of Annunciation and the Cathedral of Archangel Mikhail are located next to it.  Some other outstanding examples of the Russian architecture are:  Palace of Facets,  the church of the Deposition of the Robe,   the bell tower of Ivan the Great and the Spasskaya (Savior)   Tower,  Armory Chamber and the Diamond Fund,   the Grand

On May 5,   1892,   P.I.  Tchaikovsky settled in the house in the outskirts of Klin and lived his last seventeen months there.  In this quiet corner he found ideal conditions for his work:  here he completed the scores of "Iolanta" and "The Nutcracker",  wrote 18 piano pieces,   72 compositions,   "The Night" vocal quartet,   romances, composition No 23 to the poem of D.  Ratgauz,  Third piano concert which was his last composition.  The manuscript is dated "October, 1893.  Klin."  In this house Tchaikovsky wrote Symphony No 6 which he considered his  "best and most elaborated composition".  And it was from this house that he left for his last concert trip to St. Petersburg on October 7,   1893.

In 1894,  the first Russian memorial music museum was opened in the Klin house.

The Museum was initiated by the composer's brother,   first biographer,  playwright and librettist Modest Ilyich Tchaikovsky. His nephew Vladimir Davydov and P.I.  Tchaikovsky's servant Alexei Ivanovich Sofronov  (who presented to the Museum personal property left to him according to the composer's will)  helped to carry out the plan.

As the result of their activity a new type of memorial museum appeared which completely preserved not only the interior,  where Tchaikovsky spent his last years,  but his archive - valuable music and literary heritage.

Founded in 1856 by the merchant Tretyakov.   Initially the collection consisted of works by Moscow and St.   Petersburg painters -Tretyakov's contemporaries.  Now there are about 47.000 Russian works of art housed here.  The museum boasts the largest collection of Russian masters from the 18-th and 19-th centuries:  Nikitin, Rokotov,   Borovikovsky,  Kiprensky,  Brullov,   Ivanov and others as well as world-famous collection of ancient Russian icons. Evening visit a Ballet or opera in Stanislavski Opera and Ballet theater Or concert in Concert Hall of Tchaikovski

St.Petersburg \first class,  dinner    on board the train is included\

Meeting and assistance at the rail station ,   transfer to hotel for

Transfer to the city center for    tour of the oldest part of St.Petersburg -Strelka,

10.30 Start for the tour of the Hermitage -special early opening

Diagonally across the Neva River from the Hermitage,   is the Peter-and-Paul Fortress,  the first construction of St.   Petersburg put up by Peter the Great in 1703 to provide protection from the Swedes.  It lost its military significance before it was completed. Its guns never saw any action and were put to use as a flood -warning signal,  and the fortress housed a political prison for two hundred years.  One of its first prisoners was Alexis,   Peter the Great's own son,  accused of subversion and treason and subsequently tortured to death under Peter's supervision.  Other famous prisoners interned here were Dostoevsky,  Lenin's elder brother Alexander, Leon Trotsky.  The Fortress Cathedral is the burial place of most of Russia's Tsars and Tsarinas from the 18th century onwards, including Peter the Great.

On the grounds there is an interesting and controversial monument to Peter the Great by the Russian artist Shemiakin.  Unveiled in May 1991,  the monument stirred controversy because it portrays Peter not as a majestic giant on horseback,  as is the tradition,  but as an old man with a remarkably tiny head. Lunch in downtown restaurant

Afternoon visit of Hermitage -One of the greatest museums in the world,   consists of five interlinked buildings — the Winter Palace (previously the residence of the Imperial family),   the Small Hermitage,  the Old Hermitage,  the New Hermitage and the Hermitage Theater— and contains over three million exhibits and one of the best art collections in the world.  The gallery is most famous for its collection of West European art,  here you can see paintings by Monet,  Cezanne,   Renoir,   Picasso,  da Vinci,  Michelangelo,  Rubens and Rembrandt.  The splendor of the museum is all the more enhanced by the incredible beauty of the buildings,   inside and outside:  ornate and regal facades;  huge frescoed halls; marble,  wood,  and mosaic floors;  statues,   figurines,  antique furniture.  The permanent exhibition consists of six different departments.  By far the most popular is the Department of West European art.   Displayed on the second floor of the whole complex and the third floor of the Winter Palace,  it includes painting,  sculpture,  and applied art from the Middle Ages to modern times

Evening visit to Ballet or opera in Mariinski Theater

Depart to Pushkin for visit of Catherine Palace and Amber room

The summer palace at Tsarskoe Selo   (renamed Pushkin in 1937 to commemorate the centenary of his death)  was created for Catherine I,  the wife of Peter I,  expanded and redesigned for Empress Elizabeth and remodeled again for Catherine the Great.   It lies 25 km south of St.   Petersburg.  The baroque Catherine Palace was left in ruins by the Germans at the end of World War II,   and is today a

masterpiece of restoration.  The exterior features golden domes and blue and white facade moldings,  while the interior positively gleams and glitters with mirrors,  chandeliers and gilded wood-carvings.  The parks of the estate with the enchanting Grotto Pavilion,  the Hermitage and the Chinese Pagoda add to the splendor of the palace.

Lunch in Country side restaurant "Podvorie"

Return to St.Petersburg for visit of Theater Museum -Ballet Department where the guests can see the costumes of the world famous Ballet dancers of the beginning of the 20th century -Nezhinski,  Anna Pavlova,  Maya Plisetskaya Evening concert in Mariinski Concert Hall

Morning special visit to "behind the stage" of Mikhailovski opera

The most sumptuous non-imperial palace in St.  Petersburg was the home of the wealthiest family in Russia,who from the mid-18th century  (when the first version of this palace was built)  until the Revolution of 1917,moved in the most powerful circles.  The palace on Moika was one of the 54 estates owned by the Yusupovs.The Yusupovs were great collectors of art,  and their residence on the Moika was one on the most splendid palaces in Russia,  After 1917, most of the collections were moved to the Hermitage and Russian museum,  but the interiors are still impressive Lunch in the restaurant "Gloss"

12.00 Check out of hotel and transfer to the airport for flight home