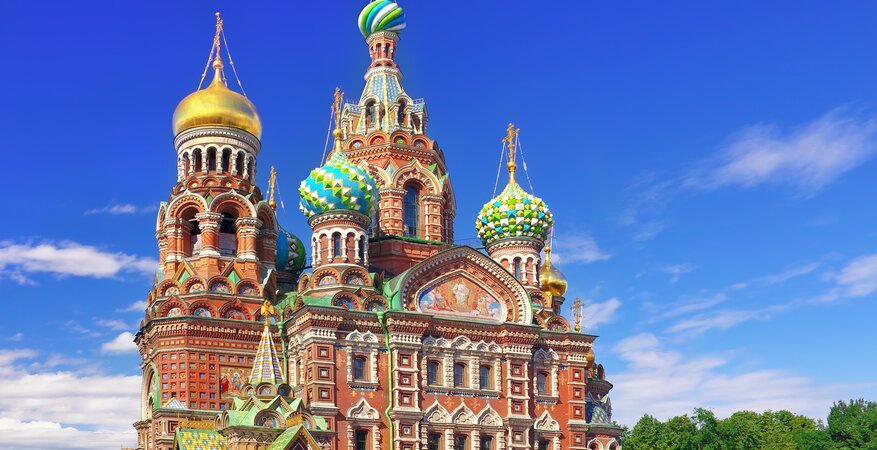 Day 1 – Meeting and assistance at the airport,  transfer to chosen hotel by car with English speaking guide

from observation platform of Sparrow Hills , panorama  of  Novodevichy

The old cemetery within the convent walls is the burial place of prominent political and public figures as well as famous artists, writers and scientists (Gogol, Chekhov, Prokofiev, Shaliapin etc.)

Continue to the Red Square for tour and visit of St.Basil’s Cathedral

The St. Basil's (Intercession) Cathedral was constructed in 1560 on the order of Ivan the Terrible to commemorate the conquest of the Tartar city of Kazan on the Volga. It inherited the traditional features of ancient Russian wooden churches (onion-shaped domes and tent roofs) but was built in stone painted in rich colors and decorated with bright tiles. Today the Cathedral is a museum housing an exhibition related to the history of its construction. The exotic grandeur of the Cathedral makes it one of the best and most striking examples of old Russian architecture.

Afternoon tour of Moscow Metro – one of the most beautiful system in the world, called Marble underground palace of Moscow

The Kremlin. A unique complex of architectural monuments

surrounded by ancient red brick walls crowned with 19 towers, which

are an important city landmark. The first wooden Kremlin was built

by order of prince Yuri Dolgoruky in 1156. Later on during the reign

of Prince Dmitry Donskoy white stone walls were erected. And in the

15th century when the seat of Orthodox religion was moved to Moscow,

several Italian architects were invited to reconstruct the Kremlin,

especially its cathedrals and chapels. Thus the architectural ensemble

of Kremlin we can see today has appeared. The center of Kremlin is the Cathedral Square with the Cathedral of Assumption, where royal wedding and coronation ceremonies used to take place. The Cathedral of Annunciation and the Cathedral of Archangel Mikhail are located next to it. Some other outstanding examples of the Russian architecture are: Palace of Facets, the church of the Deposition of the Robe, the bell tower of Ivan the Great and the Spasskaya (Savior) Tower, Armory Chamber and the Diamond Fund, the Grand Kremlin Palace, the Patriarch's Palace, the Tzar Bell and Tzar Cannon, etc.

is one of the oldest museums on the Kremlin grounds founded in 1511. The present building dates back to the 1850-s and contains the priceless collection of not only richly decorated arms and weapons but also the Russian Tsars' Crown Jewels, carriages and thrones, furniture, Royal gowns, jewelry (including the famous Faberge Easter eggs), diplomatic gifts of the 12-19th centuries.

Was built in the Neo-classical style between 1898 and 1912. The museum houses one of the world's largest collections of West European art, as well as ancient Oriental, Greek and Roman art as well paintings of Boticelli, Ribeira, Murillio, Rembrandt, Rubens and Van Dyck.

Of particular interest are the French Impressionism halls with paintings by Monet, Cezanne, Matisse, Van Gogh and Degas.

OR Tzeretelly Gallery of Contemporary Art

The building of the Gallery, the former Dolgorukovs' House, was restored and reconstructed by Zurab Tsereteli, the President of the Russian Academy of Art, in 1998-2000. Tsereteli wanted to transform the Academy, returning its leading position it had occupied in the 18th-19th centuries, as well as to realize the cultural charity initiative.
The magnificent palace, which includes vaulted rooms architecturally maintained since the 18th century and majestic rooms decorated in the middle of the 19th century, is perfect for various large-scale exhibitions. Moreover, the treasures of the Academy are constantly exposed here. Monumental art, sculptures, paintings and mosaics or  visit of Pop of Art Gallery –one of the leading galleries of contemporary art, Here three generations of Russian Artists working in different countries  gaining world wide recognition are presented

the Trinity Monastery of St.Sergius, one of the finest examples of

the early Russian architecture and nowadays the center of the

Russian Orthodox church. Among its greatest treasures is the

white stone Trinity Cathedral, built in 1423. Its interior is

crowned by icons painted by Old Masters, Andrei Rublev and

Daniel Chorny. The Monastery houses the museum of Applied Arts, which displays ancient embroidery, gold and silver tableware, palace furniture, and tapestries dating from the 17-th to 20-th centuries.

Founded in 1856 by the merchant Tretyakov. Initially the collection consisted of works by Moscow and St. Petersburg painters - Tretyakov's contemporaries. Now there are about 47.000 Russian works of art housed here. The museum boasts the largest collection of Russian masters from the 18-th and 19-th centuries: Nikitin, Rokotov, Borovikovsky, Kiprensky, Brullov, Ivanov and others as well as world-famous collection of ancient Russian icons.