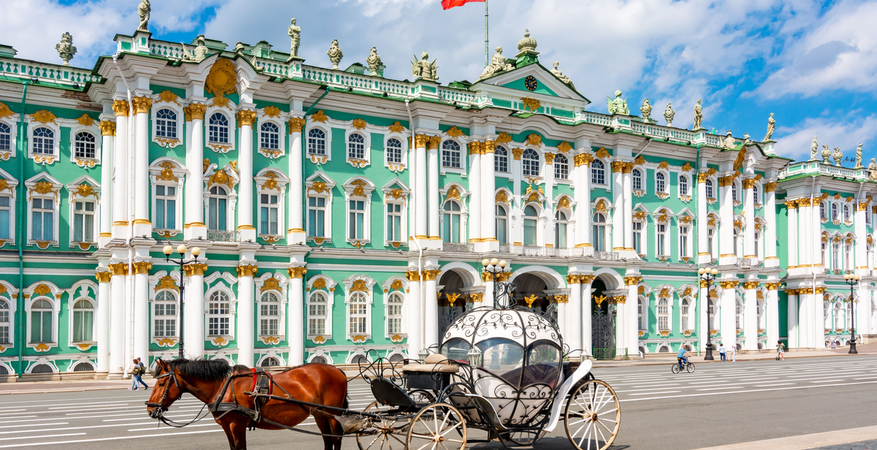 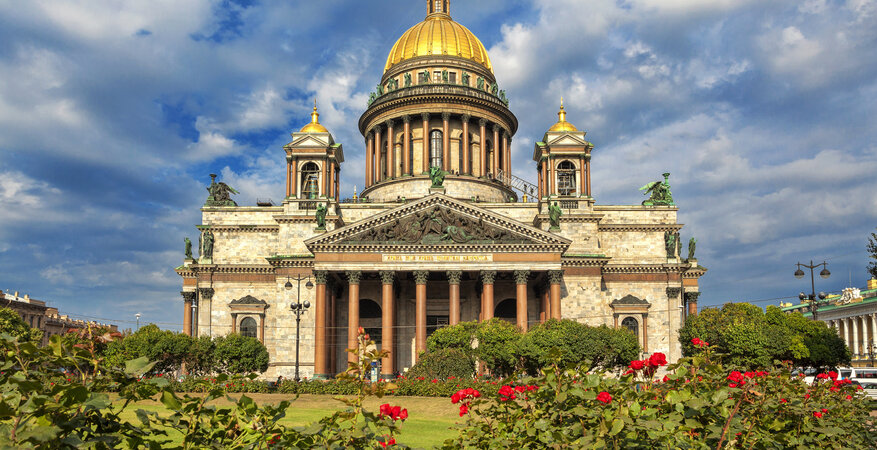 Day 1 – Arrival to St. Petersburg and transfer to hotel

Day 2 – City tour of St.Petersburg with visit of Peter

and Paul Fortress, Cathedral of Peter and Paul

Diagonally across the Neva River from the Hermitage, is the Peter-and-Paul

Fortress, the first construction of St. Petersburg put up by Peter the Great in

1703 to provide protection from the Swedes. It lost its military significance before

it was completed. Its guns never saw any action and were put to use as a flood

-warning signal, and the fortress housed a political prison for two hundred years.

One of its first prisoners was Alexis, Peter the Great's own son, accused of subversion and treason and subsequently tortured to death under Peter's supervision. Other famous prisoners interned here were Dostoevsky, Lenin's elder brother Alexander, Leon Trotsky. The Fortress Cathedral is the burial place of most of Russia's Tsars and Tsarinas from the 18th century onwards, including Peter the Great.

At the end of Nevsky Prospect, is the Alexander Nevsky Monastery. Founded in 1713 by Peter the Great this still-working monastery is one of the most important in Russia. The Cathedral of the Trinity is open until 2pm and it is possible to attend the choir services. Many of Russia's writers and musicians, including Dostoevsky and Tchaikovsky, are buried in the cemetery.

Half day in the Hermitage Museum including State Rooms, Gallery of Heroes  of 1812 year, Parade Staircase, Old Masters,  Continue tour of Hermitage , Impressionists and Hidden Treasures

Afternoon visit of the Summer Garden and Wooden Log of Peter the Great The oldest construction in the city, the first dwelling of Peter the Great. At the end of the 18-th century a stone casing was erected around the wooden cabin for the purpose of its protection. The small museum displays a unique collection of Peter's personal belongings.

The most sumptuous non-imperial palace in St. Petersburg was the home of the wealthiest family in Russia,who from the mid-18th century (when the first version of this palace was built) until the Revolution of 1917,moved in the most powerful circles. The palace on Moika was one of the 54 estates owned by the Yusupovs.The Yusupovs were great collectors of art, and their residence on the Moika was one on the most splendid palaces in Russia, After 1917, most of the collections were moved to the Hermitage and Russian museum, but the interiors are still impressive: the various sitting rooms, state rooms used for entertaining Russian aristocrats, the beautiful private theater that looks like a cozy version of the Mariinsky (180 seats, available for private performances - on request). Recently the museum opened an exhibition associated with an event that occurred in the Palace in the winter of 1916 - the assassination of Rasputin.

Afternoon Tour of Petrodvorets with visit

where Peter the Great lived  \summer\ OR Grand

Peterhof is reminiscent of Versailles and was only used by royalty for State occasions.  The pendulous chandeliers, paintings are originals; as they were fortunately removed before the German occupation. The gardens are dotted with the fountains, charming pavilions and summer houses, including the Monplaisir, Peter's original villa with bright and airy galleries facing the sea

Morning trip to Pushkin to visit Catherine Palace and Amber

The summer palace at Tsarskoe Selo (renamed Pushkin in 1937

to commemorate the centenary of his death) was created for

Catherine I, the wife of Peter I, expanded and redesigned for

Empress Elizabeth and remodeled again for Catherine the Great.

It lies 25 km south of St. Petersburg. The baroque Catherine

War II, and is today a masterpiece of restoration. The exterior

while the interior positively gleams and glitters with mirrors,

chandeliers and gilded wood-carvings. The parks of the estate with the enchanting Grotto Pavilion, the Hermitage and the Chinese Pagoda add to the splendor of the palace.

After  time for lunch  in countryside restaurant return  to St.Petersburg  to visit of St.Isaac Cathedral

The Cathedral, which can accommodate 14,000 worshippers, is overly spectacular with its lavishly decorated dome, its ornate iconostasis and stained glass window of Jesus Christ. The Cathedral was commissioned by Alexander I in 1818 and took four decades to be completed. Its architect, August Montferrand incorporated dozens of kinds of semi-precious stone and marble into the enormous structure and decorated vast interior with frescoes, mosaics, bas-reliefs. The portico columns, cut from red granite, are seventeen meters high; the mosaics have twelve thousand shades of colors; the walls are five meters thick; the cupola is coated with one hundred kilos of gold; and the whole structure weighs three hundred thousand tons.  Inside there are paintings, sculptures, and mosaics by 19th century Russian and West European masters, including a huge fresco on the inside of the cupola by Kari Bryullov and a bust of Montferrand made of different colored marbles and other minerals. Also of note are the intricately sculpted bronze doors, the central white marble iconostasis with its columns of malachite and lapis, and the huge stained-glass Jesus in Catholic colors (Orthodoxy has Christ wearing blue). A series of documents, plans, engravings, and models shows the history of the cathedral's construction.

Evening Ballet in one of the ballet theater of St.Petersburg optional

Departure to the airport